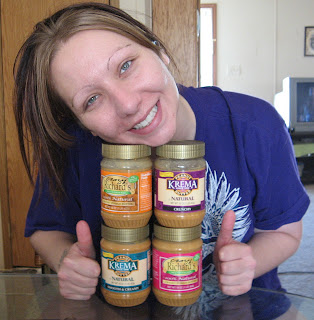 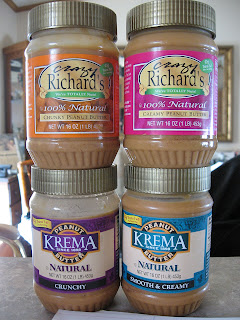 for starters, you should probably know the difference between krema & crazy richard's peanut butters... there, in fact, is none. yep, you read it right! krema bought rights to crazy richard's brand for the sake of publicity, as it's well known on the east coast, while krema is more known in the midwest. the "name" is the only distinction between them.

I never realized how "altered" peanut butters are until I came across krema.

so let's talk about krema's peanut butter... it's made of 100% specially roasted Georgia peanuts, & ONLY peanuts. that means there's been no added hydrogenated oils, sugars or salt, & contains absolutely no sodium, trans fat or cholestoral. it's a good source of unsaturated fat & folic acid, something we all need in our daily diets. & the texture is smooth & creamy verses gritty, as other trade names are.

THE TASTE-TESTING EXPERIMENT
at first I was concerned because krema (aka crazy richard's) is soup-ee. after being reassured by my mom & then later reading up on it, I now understand that's how it works with ALL natural peanut butters. because of the lack of added hydrogenated oils (among other ingredients) it does not take on a hard form. instead, it makes putting your peanut butter on bread a much easier task! I also found out that if you prefer it slightly hardened, store it in the fridge.

the best way to explain what krema tastes like is to imagine what crushed, dry roasted peanuts taste like. compared to Jiff, it's not as sweet; but Jiff has added sugars that krema don't. according to the nuval nutritional scoring system, krema & crazy richard's rank 51% good for you (when taking into account all it's good & bad nutrients), 30 points higher than any other brand on the market! Jiff scores a measly 22% at it's highest!

so if your looking to eat healthier, krema & crazy richard's fit the bill.

New comments are not allowed. DON'T MISS OUT ON ANY GIVEAWAYS! SUBSCRIBE TO "THE HYP" BY EMAIL